Vernon wrapped up the No. 3 seed in District 5-4A with a 49-43 road win at Hirschi last Friday. The Lady Lions were led by three players in double figures. Macy Flowers led the way with 13 points, Carli White added 11 and Shay Williams had 10. 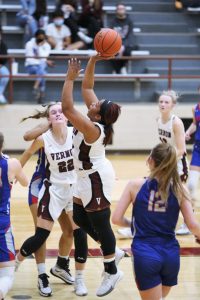 The Lady Tigers have been ranked as high as No. 6 this season in the state, but lost twice to district champion No. 11 Stephenville.
Vernon and Glen Rose have two common opponents in Graham and Anson. Glen Rose beat the Blues 54-43 in their season opener while Vernon has lost twice to the Blues, 59-37 and 55-31. Anson beat Vernon 57-39 and lost to Glen Rose 55-30.
The Lady Tigers finished as the No. 2 seed out of District 6-4A and are led by five seniors. Last season, the Lady Tigers topped Hirschi in the Area round before falling in the third round to the eventual state runner up.
The game will be a contrast in styles. Glen Rose is balanced in its scoring attack and will have a definite size advantage, and expects to play through the post. The Lady Lions will counter with a full-court press. Four Lady Tigers scored in double-figures in the season finale against Gatesville led by Jeana Douglas’ 15, while Abby Stephenson and Aimee Flippen scored 12 each, and Hannah Cantwell added 10.