Ralph Hines Flesher of Denton, Texas died peacefully in his home on March 1, 2021 at the age of 97. He was born on November 25, 1923 on the farm he loved in Thalia, Texas, the son of Nora Lettie Campbell Flesher and Frank Benjamin Flesher. He moved to nearby Crowell when he was in elementary school and graduated from high school in 1941.He attended Texas A&M University and was a member of the Corps of Cadets until being drafted into the United States Army in 1943 during World War II. While waiting to attend Offi cer Candidate School, he suffered a stroke and returned to A&M after receiving a medical discharge. After many trips on the train to TSCW (now TWU) in Denton to see his high school sweetheart, Beverly Bell Hughston Flesher, he proposed, and they were married in 1945. In 1947, after graduating with a degree in Veterinary Medicine, he and Beverly moved to Vernon, Texas, establishing the Vernon Veterinary Clinic.Always active in his community, Ralph was a director of the Chamber of Commerce, President of the Greenbelt Quarter Horse Association, Sponsor of Camp Fire Girls, and member of the Rotary Club and First United Methodist Church. He became president of the Santa Rosa Palomino Club in 1962, performing and traveling 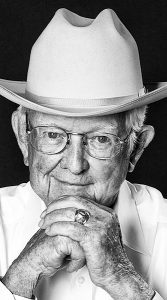 with them, and winning a national drill team championship. In 1968, he was appointed to represent the Texas Veterinary Medical Association on the Texas Animal Health Commission, frequently working at the State Capitol in Austin. In 1971, Beverly and Ralph moved to Fort Worth, Texas where he joined his business partner and dear friend, Glen Savage, in the business they created named Lone Star Veterinary Supply. After they purchased I.B.E. Industries in Denton, he and Beverly moved there, and he and Glen continued to broaden their business ventures.Ralph joined the Denton Rotary Club, serving as president from 1988-89. He was a Paul Harris Fellow and received the Distinguished Service Award. His seventy plus years in Rotary brought many friends and much enjoyment contributing to the community through various projects. He was on the board of Southwest Bancshares, a member of Denton’s Economic Development Board, and a member of First United Methodist Church. The Texas A&M University Veterinary School honored him as a Mark Francis Fellow. After retirement in 1983, Ralph frequented the golf course at Denton Country Club and was proud that his score matched his age in his eighties.He and Beverly spent many years in Denton until her death in 2004. He married Madelyn Weeth Osborne in 2006, and they lived in Denton until her death in 2014. Also preceding him in death were his parents and sisters Dorothy Flesher Richards and Evelyn Flesher Jones.Ralph was an exemplary member of the Greatest Generation. He developed a strong work ethic as a child growing up on a farm. His entrepreneurial spirit began at A&M where he sold monogrammed stationery and leather goods in the dorms and watermelons next door to Loupot’s Bookstore. He had a positive outlook on life and never met a stranger. He is survived by his daughter, Karen Flesher Hertel and husband Bill of Austin, granddaughter Chapin Hertel Townsend and husband Justin, grandson William Landon Hertel and wife Allyson, and great-granddaughters Campbell and Kendall Hertel. Also surviving him are his step-children Dan Osborne and wife Susie of Vernon and Connie Duffi e and the late Andy Duffi e of College Station. Step-grandchildren include Andrea Duffi e, Laura Duffi e, John Osborne, and Lisa Osborne Long, husband Damien and son Matthew McElroy.The family would like to thank his caregivers, Mary Ann Durbin and Jill Jurica who stood by his side for his last months. Memorials may be sent to the Rotary Club of Denton, First United Methodist Church of Denton, or the charity of one’s choice.Due to Covid restrictions, there will be a private graveside ceremony in Crowell, Texas.