Edwin Donald (E. Don) Davis passed away in Dallas, Texas on March 17, 2021 surrounded by his loving family. Don was born on June 8, 1938 in Vernon, Texas to Evelyn Bernice 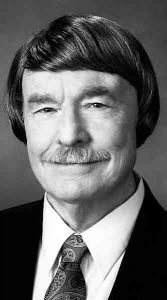 (Smith) Davis and Eldon Dean Davis. He married his high school sweetheart and the love of his life, Sue Ellen (Belew) Davis, on January 26, 1959. He attended Hardin Simmons University, Midwestern University and he was a proud graduate of LSU. He also obtained advanced degrees from what was then known as East Texas State University in Commerce.Don began a career in commercial construction in 1969 eventually becoming a project controller for The Badger Company, an international construction fi rm. This led to moves around the country and Canada on a nearly yearly basis. Don and Sue made many lifelong friends along the way. He “retired” from his fi rst career in 1976 and returned to Vernon to raise his family. He was a teacher and coach and he later became the Principal at Vernon Intermediate School and Vernon High School. He ultimately became the Superintendent of schools in Vernon, the fi rst Vernon native in memory to lead the school district. He was immensely proud of the success, both athletically and scholastically, of the Vernon schools under his watch. He managed the construction of the new Vernon Middle School as his fi nal project for the school district.Don was truly a renaissance man. He was a master plumber, farmer, gardener, rancher, mechanic, chef, poker player and educator, mastering anything that interested him. He spent many hours at the family ranch in Loving, Texas hunting, fi shing and piddling but mainly he enjoyed the company of family and friends around the campfi re. He could (and did) break most anything, usually in spectacular fashion, but he generally could fi x it just as quickly if it suited him. Don loved animals and over the years he kept horses, chickens, guineas, ducks, pheasants, bees and a never-ending collection of barn cats. He never turned away a stray of any kind. He even loved his last dog, Baxter the crazy Lab, who was truly hard to love.Don was a devoted father and grandfather who never refused the kids’ requests for all manner of dangerous, fun stuff like cars, tractors, shotguns, machetes and chainsaws, sometimes with disastrous results and stern looks from Sue. He loved the annual family trips to New Mexico, Colorado, Alaska, California and elsewhere and Don and Sue traveled extensively with old friends after retiring.Don was preceded in death by his parents and brother Dean Davis. He is survived by his wife Sue of Vernon, son Mark Davis and wife Johna of Plano, Texas, daughter Nancy Drexler and husband Paul of Humble Texas, and grandchildren Megan Carruthers and husband Patrick of Frisco, Texas, John Davis of Dayton, Ohio, Meredith Drexler of Lubbock, Texas and James Drexler of Humble, Texas along with his brother Alan Davis and wife Linda of Vernon, Sue’s sisters and brothers, Kay Belew, wife of Robert Belew (deceased), Linda Kay Dean and husband Steve, John Mark Belew and wife Sharon, Cheryl Parker and husband David and many nieces, nephews and cousins.Services were Monday, March 22, 2021 at 10:00 am at First Baptist Church, Reverend Mike Klappenbach presided. Burial was held at Eastview Memorial Cemetery in Vernon under the direction of Sullivan Funeral Home. Members of the West Vernon Social Club and old friends Jimmy Riggins, James Brock, Robert Webb, Dr. Doug Matthews, Wilson Friberg, Jimmy Pennington, Jimmy Scott, Mike Moore, Stephen Brantley and Dr. Rey Tolentino, served as honorary pallbearers.In lieu of fl owers please consider donations to your favorite charity.Online condolences may be made to the family at www.sullivanfuneralhomevernon.com