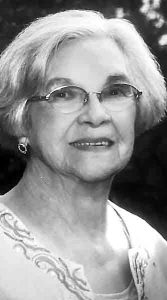 95,
passed away peacefully on March 27, 2021. Leatrice
was a loving mother, grandmother and greatgrandmother.
She enjoyed attending many of her
grandchildren and great-grandchildren’s activities
Leatrice was born on May 21, 1925 in Electra, Texas.
She married O. H. Dodson II in 1952. They lived at the
Dodson ranch near Chillicothe, Texas where they raised
Quarter horses, Thoroughbred horses, and Hereford
cattle. While raising their children Leatrice was very
involved in their lives. She was an active member of the
First Baptist Church. Leatrice was also involved in
many local organizations and severed on various
boards. The Dodsons were active in the American
Quarter Horse Association. Later in their lives Leatrice
and Oscar decided to adventure out to far west Texas.
They decided on Van Horn where Oscar had some
childhood friends from Chillicothe. During their time in
Van Horn, they developed many more livelong friends.
In 1995 after the passing of her husband Leatrice
moved to San Angelo only knowing three people. She quickly became involved in
church and other organizations where she made many close friends. She remained an
active member at Glen Meadows Baptist Church until her health began to fail. Leatrice
maintained her positive attitude and concern for the wellbeing of others until the last
moments of her life. She died peacefully in her sleep with family surrounding her.
Leatrice was preceded in death by her husband O.H. Dodson and their sons, Steven
Dodson and William Samuel Dodson, brother Milton Bessent, and sister Ruth Bessent.
She is survived by her three children Darryl Jones and his wife Lou, Tina Bean and
her husband Douglas, Joni Michael and her husband James, daughter in law Karen
Dodson. She is also survived by her grandchildren Alexandra Moore and husband
Chase, Mary Micheal, Samuel Hunter Dodson and wife Heather, and Stephanie Hope
Dodson, great-grandchildren Grace, Amy and Powell Moore and sister, Laura Slough
and husband Don.
Graveside services will be held on Thursday, April 1 at 2 pm at Chillicothe Cemetery
in Chillicothe, Texas under the direction of Smith Chapel.