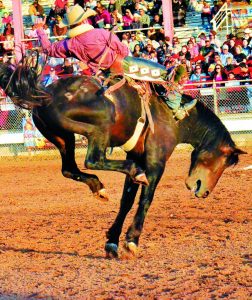 The 75th Santa Rosa Roundup rides into Vernon this week for four days of rodeo action.

The excitement starts on Wednesday, May 12, with the traditional rodeo parade. The parade will get underway at 4 p.m., with colorful floats, plenty of horses and other entries, all vying for prizes. Bringing up the parade will be the famed Palomino Club, host of the rodeo.

Gene Tyra has been named this year’s parade marshal.

Immediately after the parade will be the Lions Club barbecue from 5 p.m. to 7 p.m., at the Horse Palace on the rodeo grounds, then it’s over to the arena where the rodeo will start at 7:30 p.m.

Bullfighters Wacey Munsell and Alex Phelps will be making return appearances to the Santa Rosa to take on the bulls.

Also returning to the mic this year to describe the arena action will be Charlie Throckmorton in the announcer’s booth.

All stock will again be provided by Beutler and Son.

For the adventurous, Ride the Hide will let local folks get in on the fun. Youngsters will have lots to enjoy as well including Mutton Bustin’, Little Clowns and Calf Scramble.

On Saturday night at 9:30 p.m., two bands – the Already Goners and ReGinasis – will have folks kicking up their heels at the Horse Palace. The bands will play Saturday night only.