Lee Eugene Wilkinson, 94, passed on June 4, 2021 in Vernon, TX.Born May 2, 1927 in Floydada, Texas the fi rst child of Harl Leon Wilkinson and Roma Esther Swain Wilkinson He attended school in Floydada until his family moved in his senior year to Vernon, Texas. He graduated from Vernon High School. He served in the United States Army during WII as a Radar Technician. After the war he attended SMU where he earned a Degree in Electrical Engineering. He married his high school sweetheart Mary Avanelle Moss in 1949. She preceded him in death in 1990. He married Mary R Bursey in 1996.After college Lee worked for Hughes Aircraft before moving to Lockheed Aircraft Corporation in Marietta, GA to work on the Radar Systems in the C-130 aircraft. His career with Lockheed took him to many 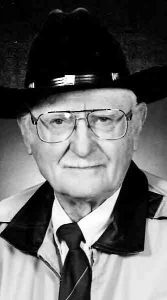 places around the CIS and the world visiting the Air Force Bases where the C-130s were based. Because of his interest in electronics he became a Ham Radio Operator early in his life. He loved to converse with his brother Tom and son David every day.After his retirement from Lockheed he became a home builder in the Atlanta, GA area. He came back to Vernon to build a house for his sister in 1977 and stayed to help rebuild after the 1979 tornado. In 1982 he purchased land high in the mountains of Colorado and built a cabin where he lived for many years. While there he obtained his Real Estate license and sold land in Jasper, CO and built several cabins for others. He loved to hike all over the mountain wilderness and fi nd hidden trout streams. Fishing was a passion of his.Lee was a pilot, learning to fl y on his father’s knee. His fi rst solo fl ight was as a teenager at Wilbarger County Airport. He owned several airplanes over the years. A Gull Wing Stinson, a Cessna T-50 and his favorite a Cessna 182. He loved airplanes, loved to fl y and loved to work at restoring the Antiques. As an active member of the Civil Air Patrol both in Vernon and Colorado where he reached the rank of Lt. Colonel. He passed his love of fl ying on to many young cadets who went on to serve in the US Military. He was member The OX5 Club and numerous other fl ying related organizations. In 2018 the FAA awarded him the Wright Brothers Master Pilot award.Always a student, he loved reading and visiting museums. Always a teacher, he shared his vast knowledge with his children and grandchildren. He never hesitated to help others learn about anything from Geology to Beekeeping, Gardening to Fishing, Aviation to Construction.Lee returned to Vernon in 2013 to move wife Mary to a lower altitude for health reasons. He missed his beloved mountains and friends in Monte Vista, CO desperately but settled in, planted fruit trees and a garden, found a new church, made new friends and renewed some old ones. Vernon was again his home. He was a member of Valley Church of Nazarene in Monte Vista, CO. He faithfully attended First Baptist Church of Vernon and was a member of Adult 5 Sunday School Class. Lee is survived by wife Mary, brother Ted and Rose Wilkinson of Watkins, CO, sisters Kathryn and Fred Hindman of San Antonio, Texas, Carol Sue Baldwin of Roanoke, Texas, daughters Helen Jane and Billy Baker of St Simons Island, GA, Rebecca (Becky) and Glenn Johnston of Vernon, Marilyn and Ronnie Davenport of Archer Lodge, NC. son David and Theresa Wilkinson of Waleska, GA. Stepchildren Chauna Hall of Arvada, CO, Laurie and Karle Grandlund of Vancouver Island, Canada, David and Kim Spirek of Kiev, Ukraine.Grandchildren Florence Hinkle, Eric and Sheila Johnston, Rachel and Chad Duckworth, Briar, and Debbie Johnston, John Davenport, Benny and Merri Davenport, Joslyn and BJ Mumford, Joe and Courtney Wilkinson, Josh Wilkinson, Mary Wilkinson Harrison, Tanja Vandezande. Step-grandchildren Hannah Hall Jackson, Josh Hall, Austin, Karyn and Kaitlyn Spirek, 22 great-grandchildren and 1 great-great-grandchild.Funeral will be at First Baptist Church of Vernon, TX., Thursday June 10, 2021, at 10 am, with interment in Floydada, TX. at 4 pm under the direction of Sullivan Funeral Home. Visitation will be Wednesday, June 9, 2021 at 6 to 7 pm at Sullivan Funeral Home. Memorials can be made to Cal Farley Boys Ranch. Online condolences may be made to the family at www.sullivanfuneralhomevernon.com.