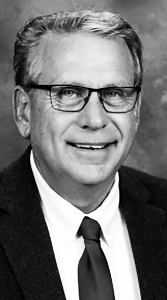 ulbarger
County school since November 2016, and had also served as principal of the Northside High School for two years prior to that.
Before that he spent 35 years in the Altus School system, including 15 years as principal at Altus High School. In 2005 he was the Oklahoma Secondary Principal of the Year.
His wife Carolyn was a long-time Vernon ISD administrator
and principal.
He was born on January 7, 1957 and grew up on the family farm seven miles north of Gould, Oklahoma.
He was a member of the Elmer United Methodist
Church.
He is survived by his wife, Carolyn; a son, Heath Hocker and wife, Michelle; daughters, Alyson Clark and Kelsey Williams and husband Kenton; grandchildren: Isaiah Hocker, J.J. Saenz, Matthew Saenz, Korey Dawn Saenz, Blake Hocker,
Jasmine Hocker and Kenna Faye Williams; two brothers, Phil Haught and wife Nova; Doug Haught and wife Judy; a sister, Sherry Davis and many nephews, nieces, cousins, colleagues and friends.
The family will greet friends at Visitation from 5:00 p.m. until 8:00 p.m. on Wednesday evening, August 18, 2021 at Lowell-Tims Funeral Home in Altus.
Memorial services will be at 7:00 p.m. on Thursday,
August 19, 2021 at the Hightower Memorial Stadium at Altus High School