Alfred JR James, 93, of Vernon, Texas, passed away Sept. 4, 2021, surrounded by his family.He was the son of the late Alfred Lafayette James and the late Ethel McCourt James and was one of nine children. He married Melba Downes in Vernon Texas on May 2, 1950. Melba and JR enjoyed 70 years of marriage to each other. JR is sur 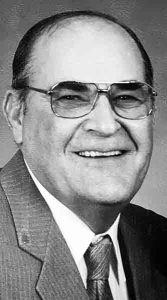 vived by his brother Bill and wife Jane of Kendalia, Texas, son Joel James and partner Geri of Santa Fe, New Mexico, daughter Barbara James of Vernon Texas, grandson Eric James and wife Kathryn of Denver, Colorado, grandson Lance James and wife Jill of Corinth, Texas, great-grandsons Emerson and Finnley James of Denver, Colorado, and great-grandson JR James of Corinth, Texas. JR was a member of the Vernon Baptist Church. Growing up he was a farmer for various families around the Lockett Texas area and worked at the dehydrator in Lockett, Texas for many years before moving to Vernon and joining the Vernon Independent School District as part of the maintenance crew. He enjoyed working with the school district and keeping things running, though he didfi nally retire.JR was truly one of kind. He was friendly and warm with everyone he encountered. He was always looking for things to keep him busy including woodwork and gardening. Both of which he took great pride in sharing with family and friends. His wooden crosses, windmills, and some of his plants can be seen all around Vernon. JR later in life continued to stay active and would routinely walk for miles around his home neighborhood. His strong work ethic and eagerness to help others will always be remembered. JR enjoyed attending church just as long as the preacher wrapped up before the Cowboys game came on the television. Visitation was from 6 p.m. to 7 p.m. on Tuesday, Sept. 7 at Sullivan Funeral Home. Graveside services will be at 10 a.m. on Wednesday, Sept. 8 at Wilbarger Memorial Park. Family friend Rev. Gary Chapman will be offi ciating the service. Donations in his name can be made to the Relay for Life.