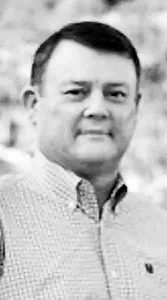 as to L.H. and Barbara (Fairchild) Wall. Jay married Terri McDaniel on August 4, 1984 in Crowell, Texas. He was a graduate of Texas Tech University with a Bachelors in Accounting and Business Administration. He was currently working in Lending and was a Senior Vice president of First Capital Bank of Texas. Prior to banking he started his career in Accounting for the W.T. Waggoner Estate in Vernon, Tx before moving to Wichita Falls to work as an Accountant for Perkins-Prothro. He currently served as a board member for the YMCA. He was also on the fundraising committee for North Texas Rehab, as well as being former member of the boards of the South Side Boys and Girls Club and The American Cancer Society. Mr. Wall was a member of the Faith Baptist Church in Iowa Park Texas.Survivors include, wife, Terri Wall, 2 children, Allison Hogue and spouse, Joshua, of Bradenton, Fl and Emily Wall and spouse, John Whitaker of Archer City, 5 grandchildren, Haley, Maycee, Jeremiah, Charis Hogue and Lexi Wall, 2 brothers, Dan Wall and wife, Kathy of Edmond, Ok and Leman Wall of Bushland and 1 sister Leah Pollan. Numerous nieces and nephews, mother-in-law, Ada McDaniel, his fur babies, Romeo, Snoopy, and Libby.Jay was preceded in death by his parents and grandparents, father-in-law, Charlie McDaniel, 2 brothers-in-law, Keith McDaniel and Al Sanderson.Jay was an avid outdoorsman and hunter. He had a passion for kids sports, never missing a game, coaching his girls either directly or on the “sidelines” and wanted all kids to have to chance to succeed. Jay’s wishes were for his family to help others in need. Memorial contributions can be made in his memory to the following organizations: YMCA, Faith Baptist Church Youth Fund, Iowa Park, Tx or Hospice of Wichita Falls.