U.S. 287 between Harrold and Electra has been closed temporarily due to zero viability, according to Vernon City Manager Marty Mangum. As many as seven fires are reported burning in Wilbarger and Wichita County, with high winds including gusts of 50 mph reported. State Highway 240 is also closed between Harrold and Punkin Center.

Mangum said that two city of Vernon firefighters have been injured responding to the incident. He said their fire truck was hit by another vehicle that did not see them in the smoky haze. He reported their injuries were not reported as serious.

In Electra, roads east and west and north and south into Electra are closed. Residents north of Electra and around  Punkin Center have been asked to self 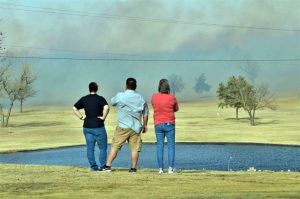 evacuate due to a 500 acre fire that is 0 percent contained, according to the Wichita County Sheriff’s Department. In Electra, at least two houses had burned.  By 2:30 p.m. Friday, burned through the Electra Cemetery and was approaching the county precinct yard. Wichita County Judge Woody Gossom announced a declaration of disaster due to fires in the Electra area.