WHEREAS, The Senate of the State of Texas is pleased to recognize Dr. Dariusz Malinowski and the City of Vernon for the development of an outstanding hibiscus-breeding program; and

WHEREAS, Dr. Malinowski is the plant physiologist at Texas A&M AgriLife Research in Vernon; he started breeding winter-hardy hibiscus plants in his yard as a hobby, and while admiring the beauty and success of the plants, he decided he wanted a wider range of blossom colors than what was available in stores; he began working on breeding plants with flowers of more diverse colors and shapes, and in 2010, his hibiscus-breeding program became an official part of the AgriLife Center in Vernon; and

WHEREAS, Over the years, the program has produced a wide range of new shades, notably a blue-flowering winter-hardy hibiscus hybrid; other novel colors include maroon, salmon, magenta, and a number of dual or multicolored flowers on a single plant; the program has also expanded to include tropical hibiscus in addition to the winter-hardy varieties; and 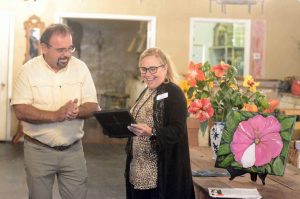 partnered in an initiative to donate hibiscus plants to community members; the city soon became known as a hibiscus community, as the popular plants were being shipped to cities across Texas and New Mexico through United Grocers and affiliates; and

WHEREAS, Now known as the world’s premier hibiscus breeder, Dr. Malinowski has been featured on the cover of Seed World magazine, and his breeding program has a worldwide presence on social media; it is truly fitting that he receive special recognition for his exceptional accomplishments and the City of Vernon be applauded for its support of his program; now, therefore, be it

RESOLVED, That the Senate of the State of Texas, 87th Legislature, 2nd Called Session, hereby commend Dr. Dariusz Malinowski and the City of Vernon on their remarkable success with the hibiscus-breeding program; and, be it further RESOLVED, That a copy of this Resolution be prepared as an expression of esteem from the Texas Senate.