According to an official with BNSF Railway company, 28 of the 98 cars on the train derailed at approximately 9:45 a.m. Saturday. As of 5:32 p.m., that night 25 of the derailed cars carrying ethanol were on fire. There are no reported injuries to crewmembers.  BNSF stated there is no threat to the surrounding community.

U.S. 287 is closed Saturday between Vernon and Harrold due to a train wreck with multiple train cars on fire. The incident happened reportedly around 10 a.m. Reports are that the train was carrying denatured alcohol. DPS troopers on scene decline to comment on possible casualties. The derailment and fires occurred about 20 cars from the west engine. Traffic is diverted at 1763 in Vernon. 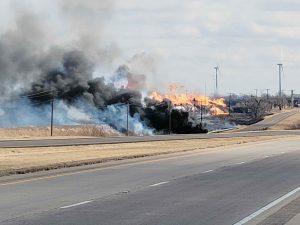