Evelyn Cato Haynes was born on March 2, 1936 to John Odis and Edith Hale Cato in Vernon, Texas. She graduated Vernon High School in 1954 and moved to Lubbock two years later. Evelyn worked at the Texas Tech University Physical Plant for twenty-one years before retiring in 2001.

She moved into the Sherick Retirement Home for Ladies in 2015 where she made numerous friends that will miss her greatly. Evelyn was a member of the Southcrest Baptist Church and in her memory the family asks that donations be made to the Lubbock Meals on Wheels or the South Plains Food Bank.

A graveside service for Evelyn will occur at the Eastview Cemetery in Vernon on Saturday, March 26th at 11 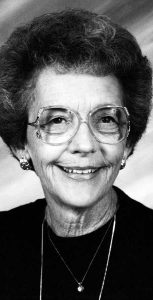