A wind-fueled fire swept along a line for nearly four blocks through Vernon on Sunday evening. Two houses, and a garage burned down. Several fences and outbuildings sustained damage. Yards and trees were burnt to a crisp.

The fire was part of a series of blazes that scorched northwest Texas and southwest Oklahoma, over a long weekend of fires.

Watch video of the fire.

Read more of the blaze and the investigation as well as the regional fires in this week’s print edition of the Vernon Record. 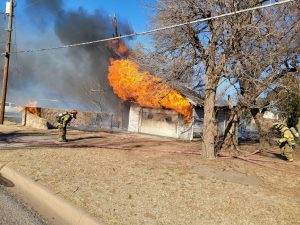