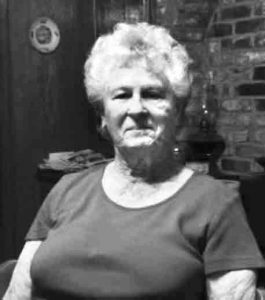 as. June was born May 17, 1929, in
Vinson, Oklahoma, to Floyd Ernest Burgess and
Naomi Jones Burgess.
June was a member of the First United Methodist
Church in Vernon, Texas. She was a homemaker,
but was very active raising animals. June was
the national registrar for the American Council of
Spotted Asses, a member of the American Kennel
Club raising French Bulldogs, and raising registered
Brangus cattle. June was a talented seamstress
and was a multi-engine private pilot. She enjoyed
cooking, gardening, working in her yard, painting,
needlepoint, and being outside.
June was preceded in death by her parents; two
sons, Steve Brown and Monty Brown; one brother,
Wayne Burgess; and one grandson, Robert Brown.
Survivors include her husband of 75 years, Robert Douglas Brown of Omaha;
one son and daughter-in-law, Alan and Charlotte Brown of Huntsville, Arkansas;
one daughter and son-in-law, Nancy and Benton Sosolik of Waco, Texas; three
brothers and sisters-in-law, Ken and Sue Burgess of Lubbock, Texas, Jim
and Elaine Burgess of Jacksonville, Texas, and Mike and Marilyn Burgess of
Richardson, Texas; seven grandchildren; twenty-one great-grandchildren; and
numerous other relatives and friends.
Cremation arrangements are under the direction of Harrison Funeral Home,
Naples, Texas.
Memorials may be made to The American Heart Association.