The Vernon Fire Department has dealt with as many as 12 fires today, due to high temperatures, single digit humidity and winds sustained in excess of 20 mph.

City Manager Marty Mangum reported at 11 p.m. that five fires were burning in Wilbarger County, including a structure fire at Houston and Wanderer. Fire crews were working to keep the fire, which brought down power lines along the street, from spreading to adjacent properties throughout the night.

Vernon Fire Chief Chris Cook reported he had brought in outside aid from Chillicothe and Electra. Chief Cook said only one of the fires was a structure, and the rest were grass and brush fires. Some personnel were treated for smoke inhalation at an earlier fire at the recycling center on north Main. See fire video.

The temperature had dropped 25 degrees from 8 p.m. to 11 p.m. and officials hoped that they danger was subsiding. 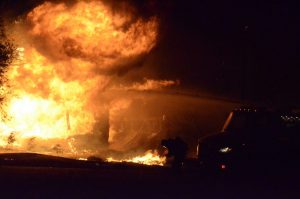 Vernon firefighters battle a structure fire at Houston and Wanderer on May 2, 2022. The Vernon Fire Department has dealt with a dozen fires during the day.
Daniel Walker/Vernon Record