Verla Virginia Brumley, 91 of Vernon, Texas died on Saturday, May 7, 2022, in Vernon, Texas.Services will be Friday, May 13, 2022 at 2 p.m. at First Baptist Church with Rev. Brooks Kimmey offi ciating. Interment will be held at Wilbarger Memorial Park.Verla was born Tuesday, May 13, 1930 in Hollis, Okla. She was the daughter of the la 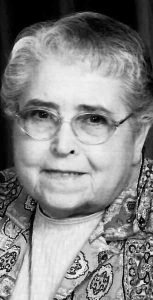 te Alonzo Bartlett Carpenter and Eula Mae White Carpenter She married Lloyd Francis Brumley on Dec.10, 1949 in Sundown, Texas. He preceded her in death Nov. 27, 1987. She was a graduate of Sundown High School and she moved to Vernon in 1959. She was a Camp Fire Leader and a Cub Scout Den Mother. She retired from Vernon State Hospital. She was a member of First Baptist Church and she was a homemaker. Verla is survived by her two sons, Andy Brumley and wife Sheri, and William Allen Brumley and wife Debbie, both of Vernon, Texas, one daughter, Barbara Dunn of Vernon, Texas, two brothers, Walter Carpenter and C.R. Carpenter, both of Waldron, AR.; numerous grandchildren, great grandchildren and great-great-grandchildren. She is preceded in death by her parents, husband, daughter Tresa Marie Brumley Sept. 20, 1972, and her brother Jessie Wilburn Carpenter in 1947. Visitation will be Thursday, May 12, 2022 at 6 to 7 p.m. at Sullivan Funeral Home. Memorials can be made to Hospice of Wichita Falls, or First Baptist Church. Online condolences may be made to the family at www.sullivanfuneralhomevernon.comVerla