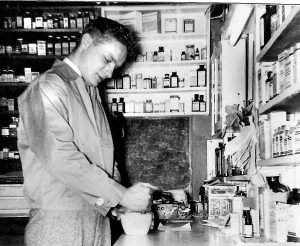 with Rev. Darrell Monday officiating. Interment will be held at Wilbarger Memorial Park under the direction of Sullivan Funeral Home.Jim was born Wednesday, May 9, 1928 in Granite, Okla. He was the son of the late Marion Burr Spears and the late Rosa Adams Spears. He married Patricia Ann Holden on Dec. 31, 1950 in Granite, Okla. He served in the US Army 1953-1955. He had been a resident of Vernon since 1955. He was a graduate of Southwestern University Pharmacy School. He opened Spears Pharmacy in 1959 on Fannin Street. Later he owned City Pharmacy, then he moved to the Gibson Pharmacy. He was a three-time President of Kiwanis Club, and he served two terms on the Vernon City Council, Gideon’s International and Board of Directors for First State Bank.Jim is survived by his wife Pat Spears of the home, son, Terry Spears and wife Susan of Vernon, Tx., daughters, Pam Ramsey and husband Mark of Georgetown, Tx., and Susan White and husband Michael of Vernon, Tx.; brother, Jerry Spears and wife Ruthie of Mustang, Okla., five grandchildren, and eight great-grandchildren.Jim is preceded in death by his parents, and 14 siblings. Visitation was Wednesday, June 22, 2022 at Sullivan Funeral Home.Memorials can be made to First Baptist Church or Gideon’s International. Online condolences may be made to the family at www.sullivanfuneralhomevernon.comJim