John Brown Hardin III of Vernon, Texas passed away at the age of 67 on Wednesday, June 15, 2022 in Dallas Texas.A memorial service was held Wednesday, June 22,2022 at 2 p.m. at the First Presbyterian Church in Vernon, Texas with Pastor George Records and Dr. Ike Butterworth offi ciating. Visitation was Tuesday, June 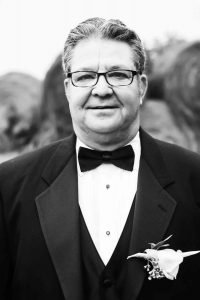 21, 2022 at Sullivan Funeral Home Chapel.John was born February 19, 1955 in San Antonio, Texas. He moved with his family to Vernon, Texas in 1957. He attended schools in Vernon and graduated high school in 1973. He attended The University of Texas in Austin and graduated with a Bachelor of Arts in 1977. He was a member of Delta Tau Delta Fraternity as well as a member of the Silver Spurs who are the caretakers of Bevo. John moved back to Vernon and started working at Vernon State Hospital. Later, he became executive Director of the Chamber of Commerce. He started his career at Vernon College in 1985 as Director of Recruiting. He continued his education and received his Master of Arts in 1990 and served as Dean of Students. He served as interim President in 2008-2009. He retired as Dean of Student Services and Athletic Director after a lengthy career at Vernon College and began his lifelong passion of farming and ranching on his family property in Hardeman County.John was a member and Elder of the First Presbyterian Church. He was a member of the Santa Rosa Palomino Club and member of the Rotary Club serving as President in 1984-1985. He served on many boards in Vernon including the Red River Valley Museum, Vernon ISD, Boys and Girls Club, Crime Stoppers and was an enthusiastic supporter of all Vernon activities.He is preceded in death by his mother: Reva Mae Hackney Hardin.He is survived by his father: Dr. John Brown Hardin, Jr; his son: John Brown Hardin IV and wife Annabel; his daughter: Jennifer Ann Kute and husband Josh; his three granddaughters: Presley Kute, Brenley Kute, and Florence Hardin; his sister: Pamela Hardin Bond and husband Dan; his aunt, Faye Hackney Schrupp, and many nieces and nephews and cousins.In lieu of  owers, the family requests memorials to: Red River Valley Museum, First Presbyterian Church, Boys and Girls Club of Vernon or the charity of your choice