Francis Nan Todd Wagoner, loving wife, mother,
sister, aunt, and friend, passed away on Aug. 9,
2022 at age 76. Nan was born on April 29, 1946 in
Chillicothe, Tx. to Francis E. and Helen Harwell Todd.
In 1964, Nan graduated from Vernon High School,
receiving multiple honors and awards. She represented
Vernon in the 1964 Miss Texas Pageant and was
awarded Miss Congeniality.
Nan received her BS degree from Texas Tech
University. In June 1977, she married Eric Wagoner,
and they welcomed son Colin in 1986. She earned her
law degree from South Texas College of Law in 1980
and practiced law for almost four decades in Houston.
Nan was a member of Palmer Memorial Episcopal
Church in Houston and active in the Bellaire /
Southwest Houston Rotary Club and Kappa Alpha
Theta Alumnae of Houston Southwest.
Following the loss of their home to Hurricane Harvey in 2017, her family
moved to Hearne, Tx. to be near her sister and family. They were members of St.
Philips Episcopal Church. Nan was a creative spirit and loved art and theater. She
was a dramatic storyteller and could recall lyrics from a multitude of productions.
She was known for her quick wit, rich imagination, and boisterous laugh.
Nan was preceded in death by her father, F. E., and mother, Helen. She is
survived by her husband Eric, son, Colin, her sister, Jan Batson, all in Hearne, Tx.,
and two nieces and two nephews.
A memorial service was held on Aug. 14, 2022 at St. Philips Episcopal Church
in Hearne, Tx, and a memorial service will be held in Vernon at a later date. 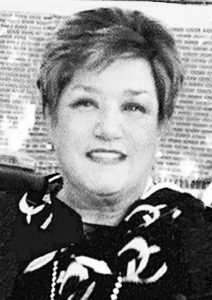