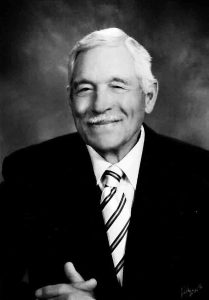 Lawrence Edwin (Bud) Balser passed from this life
on Friday, August 26, 2022 at the age of 92. Bud Balser
was born March 1, 1930 in Ripley, West Virginia to
the late Rosa Lee Balser and John Henry Balser. He
graduated from Ravenswood High School in 1948 and
entered the Air Force in September of that year.
He trained in aircraft maintenance, and his
subsequent assignments as a mechanic supervisor span
the small single engine pilot trainees to the modern jet
 ghters, cargo, and bomber aircraft. His duties took
him to Newfoundland, Portugal, the Azores, Korea,
Japan, Okinawa, England and Spain.
Senior Master Sergeant Balser, received Korea’s
highest decoration awarded a foreign, living military
man in 1958, while serving as crew chief  ight
engineer on an aircraft  ying high offi cials attached to
the United Nations in Korea.
He was awarded the Air Force commendation medal in 1965 for His outstanding
performance as a  ight chief assigned to an Aerial Refueling Squadron and upon
retirement, was awarded a second commendation medal for his work as chief of
Lockbourne’s Quality Assurance Division. M/Sgt. Balser retired from the Air Force
after 22 years Federal Military Active service.
Sgt. Balser married Patsy Joyce Hulen of Lubbock, Texas in Clovis, New Mexico
in 1951. They had three children: Larry Balser and daughter-in-law Linda of Wichita
Falls, Cecilia Grussendorf of Dallas, and the late Scott Balser of Pennsylvania. After
retiring from the military, the family Moved to Vernon, Texas and purchased O’Neal’s
Jewelry Store. Sadly, Pat passed away in 1995, and Bud retired from Balser’s Jewelry
on June 8, 1996 after 27 years.
Once retired from Balser Jewelry, Bud found love with Gail Iman. In June of 1997,
they were married, adding another chapter to his life. Gail brought with her, Audra
Whitworth Burgess and Peyton Iman bringing his children to  ve. Bud and Gail have
spent many years of love. They have taken trips and adventures to Ohio, Fort Worth,
and Indiana. They together have been devoted to church projects and weekly meetings
or dinners with friends. Bud and Gail loved to garden, and share their love for the
Lord. But there is more! Bud’s family at the Herring Coff ee Shop. They have had
too many laughs to count and told way too many stories, always being there for each
other.
A few of Bud’s Vernon accomplishments include: Charter Member of Vernon
Crime Stoppers, President of Boys & Girls Club of Vernon, President of Vernon Lions
Club, President of Crime Stoppers, Secretary of J. Carl Smith Sunday School Class at
First Baptist.
He loved to  sh,  sh, and  sh! Bud deeply loved his grandchildren: Lori Phillips,
Lauren and Matt Grussendorf, Alek and Henry Whitworth, and Brooklyn and Addison
Iman and great granddaughters Madelynn and Savanna Phillips.
Services will be Wednesday, September 7, 2022 at 10 a.m. at First Baptist Church
with Rev. Gib Baskerville and Mike Klappenbach offi ciaitng. Interment will be held at
Wilbarger Memorial Park under the direction of Sullivan Funeral Home.
Visitation will be Tuesday, September 6, 2022 at 6 to 7:30 p.m. at Sullivan Funeral
Home.
Memorials can be made to Texas Lions Club Crippled Children Camp at Kerrville,
Texas.
Online condolences may be made to the family at www.
sullivanfuneralhomevernon.com