Vernon hosts the Idalou Wildcats on Friday, with kickoff scheduled for 7 p.m.
“Idalou is a football haven around Lubbock. They have outstanding participation, and they know how to win. They typically play 2 or 3 rounds into the playoffs and they expect to win,” Vernon Coach Kevin Sherrill said.
Idalou (2-1) suffered its first loss of the season 37-7 to Holliday. The Wildcats came into the game ranked No. 10 in a 3A DII battle of top 10 teams against the No. 3 Eagles. But the game wasn’t close as the Eagles were able to dominate up front in rushing 49 times for 347 yards in the win, while their defense scored a touchdown and a safety in limiting Idalou to 27 rushes for 93 yards, and 16 of 26 passing for 115 yards.
Coach Sherrill said the loss to Holliday was not representative of what he expects on Friday from Idalou.
“They are going to be tough, and it is going to be a dogfight,” he said. “We all know how good Holliday is, and they will be playing a while. But Idalou’s defense is very good and kept them in the game in the first half. They had a goal line stand, almost had two against Holliday, but they couldn’t get anything going on offense, and wore down.”
Idalou has a 38-20 win over Sweetwater and a 14-9 win over New Deal. Sweetwater also lost to San Angelo Lake View 39-25, which Vernon beat last Friday.
The Wildcats are under first-year coach Clay White, the former defensive coordinator at Lubbock Cooper. 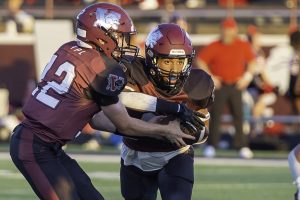