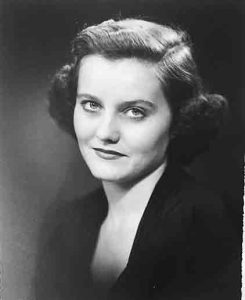 Mary Kathryn (“Bebe”) Murrell Moore Johnson died on Sept. 16, 2022.
She was born in Vernon, Texas on Aug.18, 1929.
She was the daughter of Dick and Lillian Murrell and
the sister of Buddy Murrell. She graduated from
Vernon High School in 1947, matriculated at the
University of Texas at Austin later that year, and was a
member of Tri Delta sorority. On Aug. 12, 1950, she
married William Raymond (“Bill”) Moore, Jr. at the
First Methodist Church in Vernon. They had two
children, Billy and Elise, and were very active in the
Vernon community.
When Bill died in March of 1990, Bebe continued
to live in Vernon. In April 1994 she married Sam
Johnson, who had also attended VHS. After Sam’s
first spouse died, he and Bebe struck up a friendship which led to their marriage.
In 2000, Sam and Bebe moved to Kerrville, Texas. Sam passed away in January
of 2018 in Kerrville. Bebe was a loving daughter, devoted wife, caring mother,
and an exemplary role model to many young women in Vernon.
Her memorial funeral service will be held at the First Methodist Church at 11
a.m. on Sept. 22, 2022, to be followed by a reception in the church parlor.
In lieu of flowers, please make a charitable contribution to Peterson Hospice,
250 Cully Dr., Kerrville, TX 78028.